Together with the German National Tourist Board (GNTB), funded by the Federal Ministry of Economics and Energy, I developed the concept in advance, took over the shooting on location, and then the complete post-production of the five videos. All this for the Sounds of Germany. It is exactly these projects that drive me forward: making 3D audio content available to a broad audience. To exhaust the technical possibilities and to enter new creative territory.

Here you can find the campaign: https://mp.secretescapes.com/uk/2020/germany/

Later, the individual videos will be available on social media. By the way, it has nothing to do with "Sound of Germany" by musician Olli Schulz. It was just our turn earlier with the idea 😉 The same applies to Funk’s "Sounds Of" series, which can be found as "soundsof" on YouTube.

First the question in the area: How can an immersive online campaign for destination marketing with 3D audio look at all. And, of course, what do the Sounds of Germany sound like? Four videos of about two minutes were planned, covering four cities and additionally a trailer for Germany as a whole. Since 2020 is the year of Beethoven’s 250th anniversary, this year the focus should be on the sound.

After viewing the already produced videos of the tourism industry, I came to the conclusion. The moving image looks like beautiful, but the soundtracks are not much more than stock music. Therefore the concept was born to collect sounds as an immersive tourist, which complement each other to a beat during the video. As if that wasn’t challenging enough, I wanted to reinterpret one of four Beethoven symphonies at the end. And the whole thing in 3D audio. 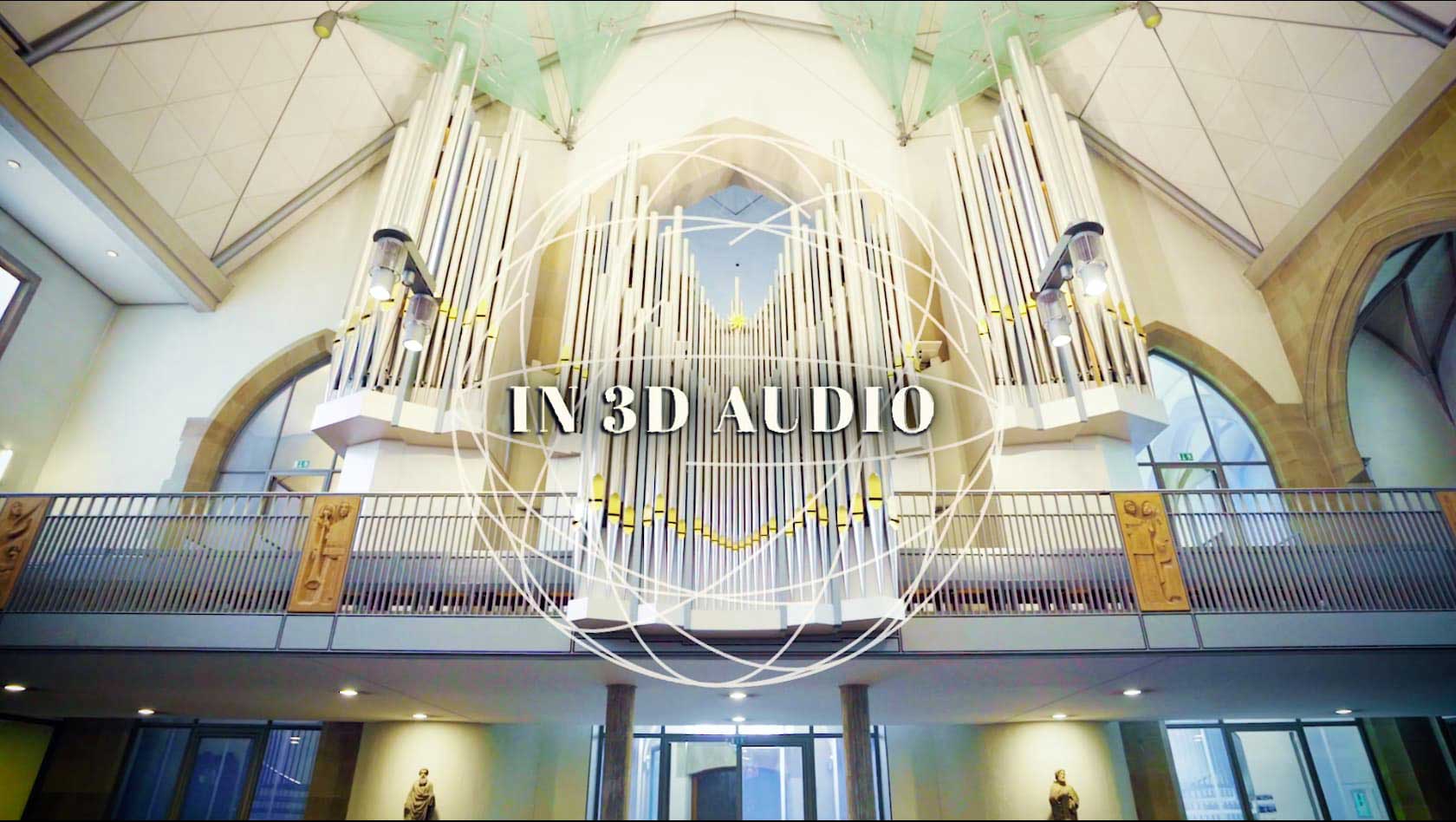 Thanks to my experience in this area, I know that 3D audio works especially well with the right moving pictures. Even if 360° video or similar formats are exciting for spatial sound, it should be as simple as possible and reach as many people as possible. Because you can assume that every household has this audio device at home: headphones. That’s how easy it can be to make immersive 3D audio accessible at home.

Requirements for the moving pictures

But this also created new demands on the video content. Therefore we decided to shoot the whole material from the ego perspective. This makes it easy for storytelling to explain why the sound is three-dimensional in the first place. In addition, exciting interactions with hands can be created, which not only produce sounds that are important for the resulting beat. Because protagonists in the true sense of the word should not be the focus, but the cities themselves. Thanks to the POV view, viewers can also feel their way better into the immersive journey – even without VR glasses, comfortably from home.

Coordination the topics of the different videos

The four destination partners, Stuttgart, Leipzig, Düsseldorf, and Berlin must of course be treated equally. Therefore, the clips all start similarly with putting on the headphones. The creative idea behind this is also that the sound jumps from stereo to 3D audio so that the user can directly hear the difference from conventional movie picture soundtracks. In the trailer, however, no city should be immediately recognizable, but rather typical German pictures and sounds should be heard.

The cities should also not be too similar and should stand for themselves. Drone shots, epic music, time-lapse. This has already been done enough in connection with tourism. Therefore, each partner should name about eight POIs (points of interest), which should be present in the video. It was also pleasing how the partners viewed their own sights from a nine-point of view or rather listening angles. This enabled me to apply the concept to the different cities and to work out a certain stringency among the videos with an individual touch at the same time.

Increase of the Production Value

Match cuts were a creative stylistic device to avoid jumping hard from place to place with hard cuts. They were perfectly suited to stay in the flow of the story and at the same time maintain the fast pace of narration necessary for online advertising. They also created a nice dynamic for the sound: Sometimes the cut was used as a break, but sometimes to put even more focus on the sound or even to use ASMR sounds. Here is a selection of established match cuts:

The POIs were used to create a creative playground to stage the locations even more playfully. 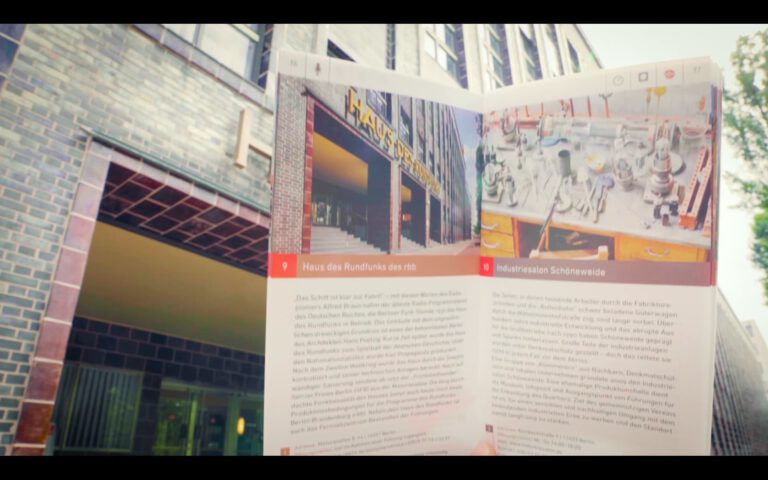 During the conceptual design, there was hype in Germany about 8D Audio. In my blog post I was already able to point out the topic in detail and explain the pros and cons to the people involved. The goal here was to take the enthusiasm for 8D music and apply it to the Sounds of Germany. In other words, I worked a lot with the rotation of the sound around the user and support this with movement in the visual material. This made the audio mixing much more unconventional because the classical approaches got in the way of the wow-effect.

Even though the Beethoven Jubilee was to be celebrated in 2020, the year was mainly marked by Corona. Therefore, the shooting of the four cities was postponed to July and August. So the team consisted of the cameraman Matthias Wallot and myself. This meant that we were on the road across Germany for almost a month. But the time was good, there were as few Covid-19 infected people in the months as there had been for a long time. As a two-man team, the minimum distances could be maintained at all times. 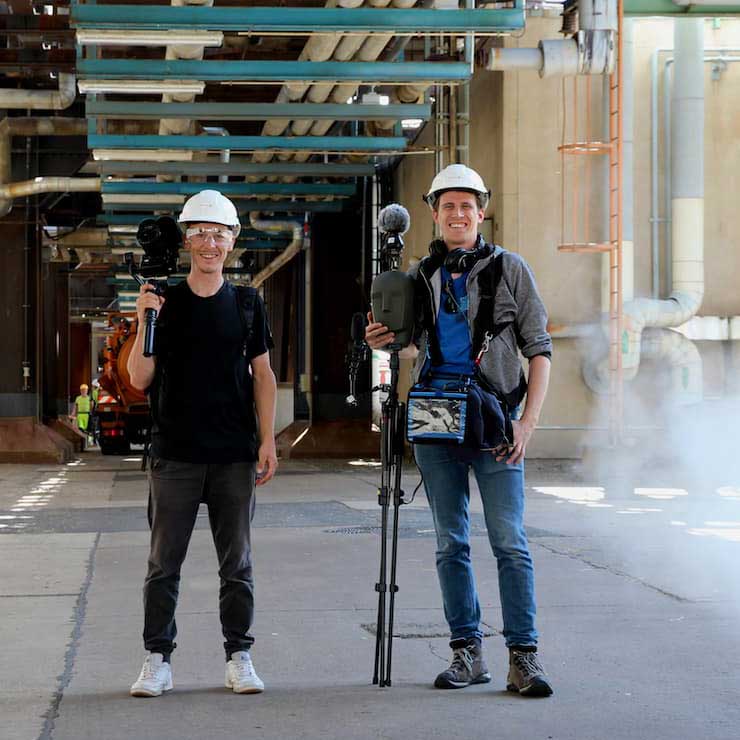 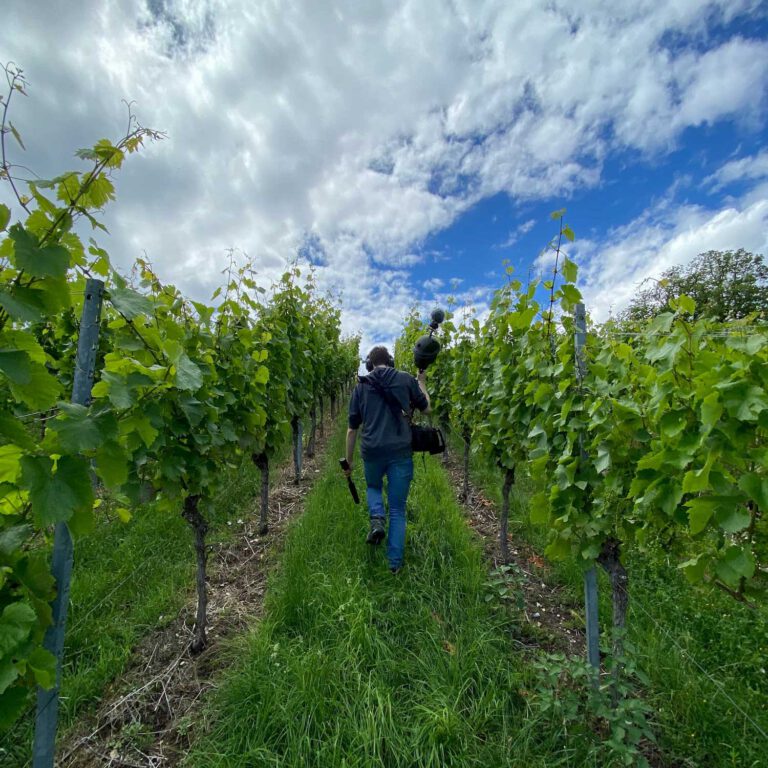 This was followed by over two months of editing, color correction, sound design, and mixing. Even though I usually concentrate exclusively on 3D audio editing, it made absolute sense for Sounds of Germany to also do the image editing. According to the concept, image and sound intertwine extremely strongly. So I have to find images that in the right order also produce the right sound. Do not forget: In the end, the result should still be Beethoven. Therefore I was able to collect the matching sounds during the editing process and create a beat that runs through the video and changes depending on the POI. I may reveal: Yes, it was not easy and in the meantime, it has brought me to my limits. But that’s exactly why I do these kinds of projects: only outside the comfort zone can growth arise.

Secret Escapes was chosen as a partner for the landing page. They managed to convince the GNTB with a creative concept. In addition to the video content I provided, they added so-called video overlays. This way the user could see at any time at which POI he or she was at the moment, while the video continued to run seamlessly. So you can imagine it as graphic elements, but they were not embedded in the video, but via the homepage. 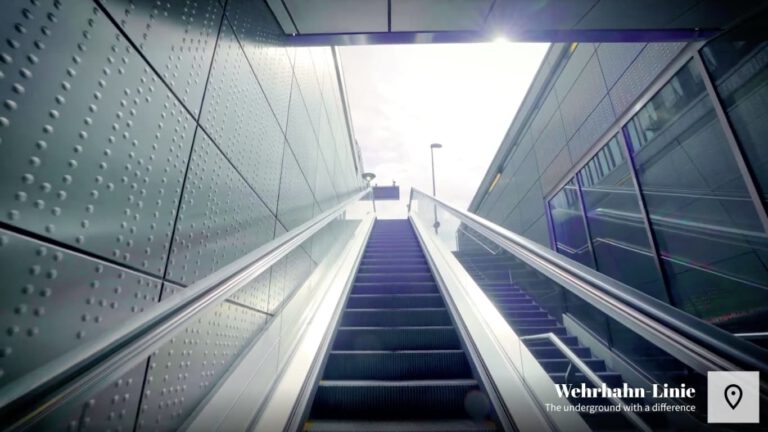 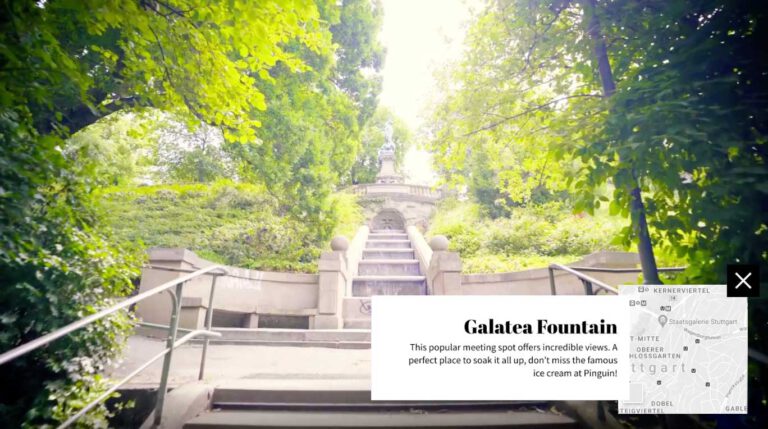 In addition, I took Sennheiser on board as an additional partner for the Sounds of Germany. Thanks to my network I knew that they would fit in very well with the project with their Ambeo program and Dear Reality. The GNTB was also pleased to have another German partner, as the past has already shown that cooperations work well in this context. For example, putting on the headphones became a product placement for Sennheiser MOMENTUM Wireless. Thanks to the use of Sennheiser’s social media channels, the reach of the campaign was further increased and I was able to create a win-win situation for everybody involved. 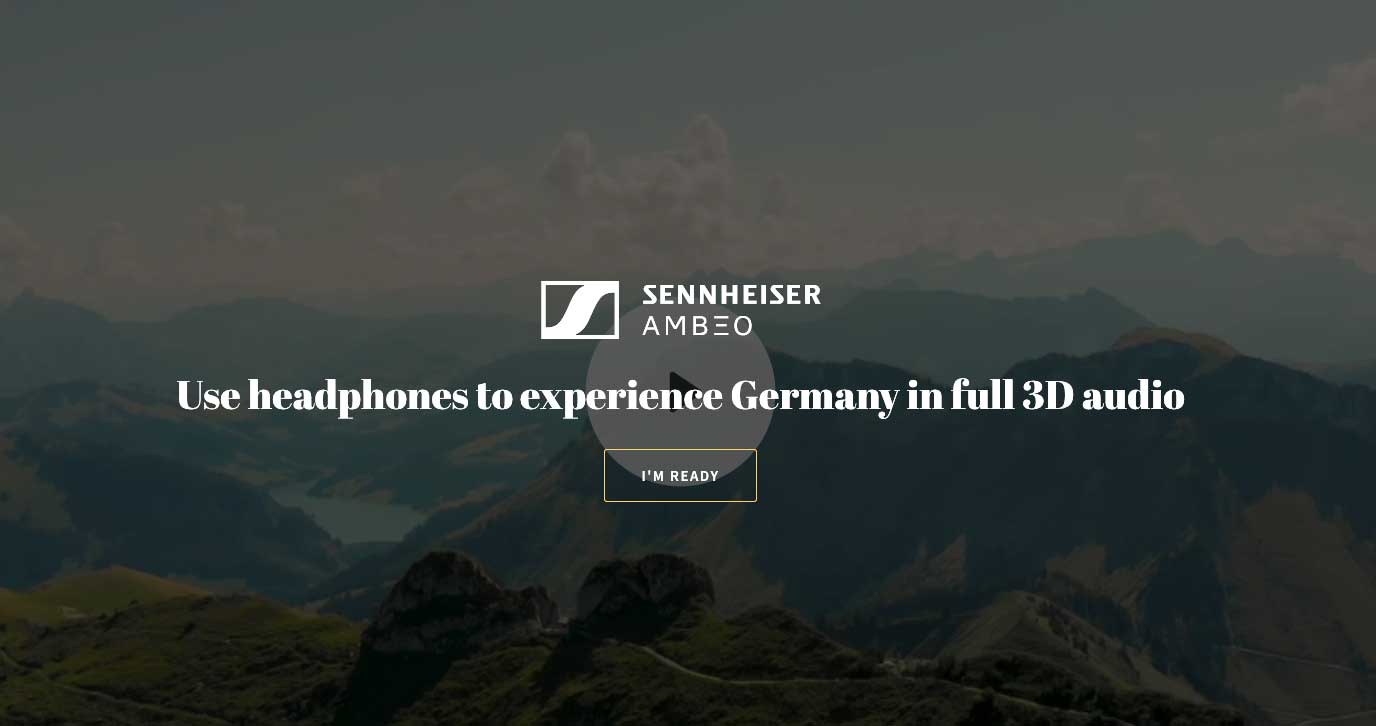 The Sounds of Germany videos are so packed with creative elements that I want to list them here. 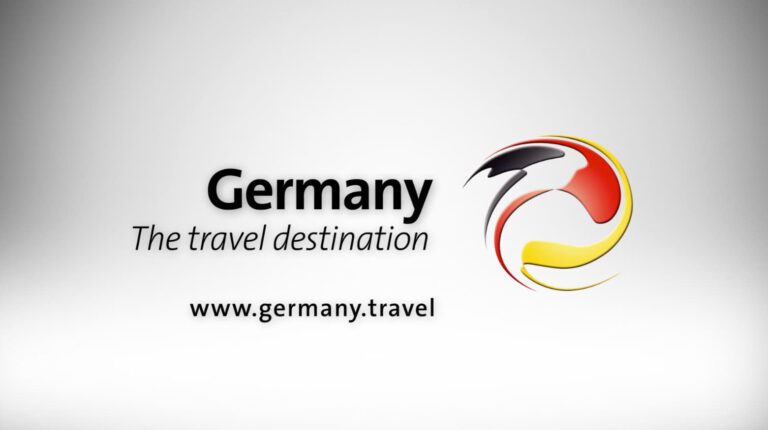 Those were the Sounds of Germany. Here you can find even more pioneering work in