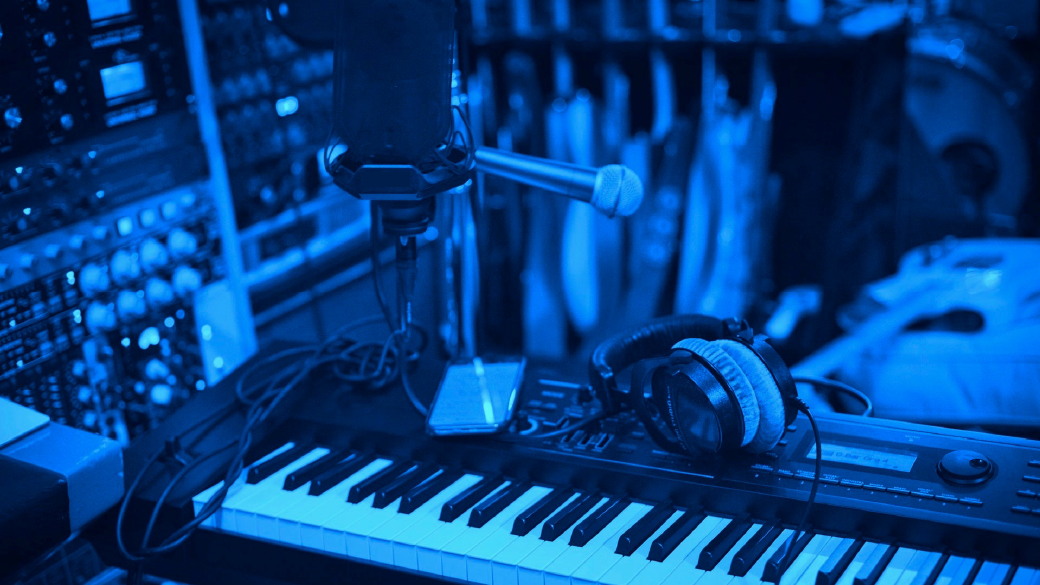 Dolby Atmos Music – What is this 3D sound experience in detail?

"Dolby Atmos Music is an immersive music experience that adds more space, clarity, and depth to your music. Instead of just hearing your music – with Dolby, it feels like you’re inside the song" (Dolby, 2020).

Here, however, we will now look at the technical background of the new technology. Or is Dolby Atmos Music not so new after all?

The term "Dolby Atmos" is an umbrella term for Dolby’s immersive sound experience that enables the production and playback of music and audiovisual content. "Immersive" – also known as "3D audio" – means that sound can be perceived from all directions. In the case of Dolby, this can be transmitted via various codecs (Dolby Digital Plus, Dolby TrueHD, AC-4).

Dolby Atmos was introduced in 2012 as a playback system in cinemas and expanded over the years to the home cinema sector. Since 2017, Dolby Atmos has also been available via streaming services such as Netflix. So keep in mind: it’s more of a marketing term than a technical definition of a audio format.

Dolby Atmos Music, on the other hand, is an object-based technology for the production and playback of immersive audio content, based on the AC-4 and Dolby Digital Plus (DD+) codecs.

What does "object-based" actually mean?

In recent years, object-based audio has become increasingly important and is now entering the music streaming market through object-based technologies such as Dolby Atmos Music and 360 Reality Audio. Compared to channel-based audio, where the loudspeaker signals are stored and transmitted as the final production format, in object-based audio the audio content is described by audio objects.

What are audio objects?

An audio object can be considered a virtual sound source consisting of an audio signal with associated metadata such as positions or loudness. Audio objects can be placed in the room independently of the loudspeaker positions – a distinction must be made here between dynamic and static objects.

In contrast to static objects, the positions of dynamic objects change over time. Channels placed at fixed loudspeaker positions can also be used and transmitted in object-based productions.

In the music streaming space, Dolby Atmos Music can be played via Tidal HiFi (in combination with Dolby Atmos-enabled devices via headphones and speakers) orwdm_placeholder_number_1HD (via the Amazon Echo Studio* speaker). Dolby is collaborating with several music companies for this purpose. As a result of these collaborations, albums and tracks already published in stereo or 5.1 surround will be re-released in Dolby Atmos Music format, as well as newly produced for it.

Dolby Atmos Music gained particular prominence in May 2021, when Apple made a big announcement that it would be able to play Dolby Atmos Music content via Apple Music with its new operating system. The whole thing works via iPhones, iPads, Macs as well as 4k TVs* and associated Dolby Atmos Home System.

Here is probably the most detailed linking of all Dobly Atmos Music productions and their playlists. Most curated music lists usually have a maximum of 100 tracks. But here you will find more than 1000, with a strong tendency to increase. So just take a listen for yourself in various genres such as:

Perfect for people who simply want streaming demos of various albums that are not yet available on Spotify. By the way, it also works with Sonos speakers. So it’s not exclusive for Apple products. Such as Amazon Echo Studio is spatial audio exclusive for Amazon Music HD. 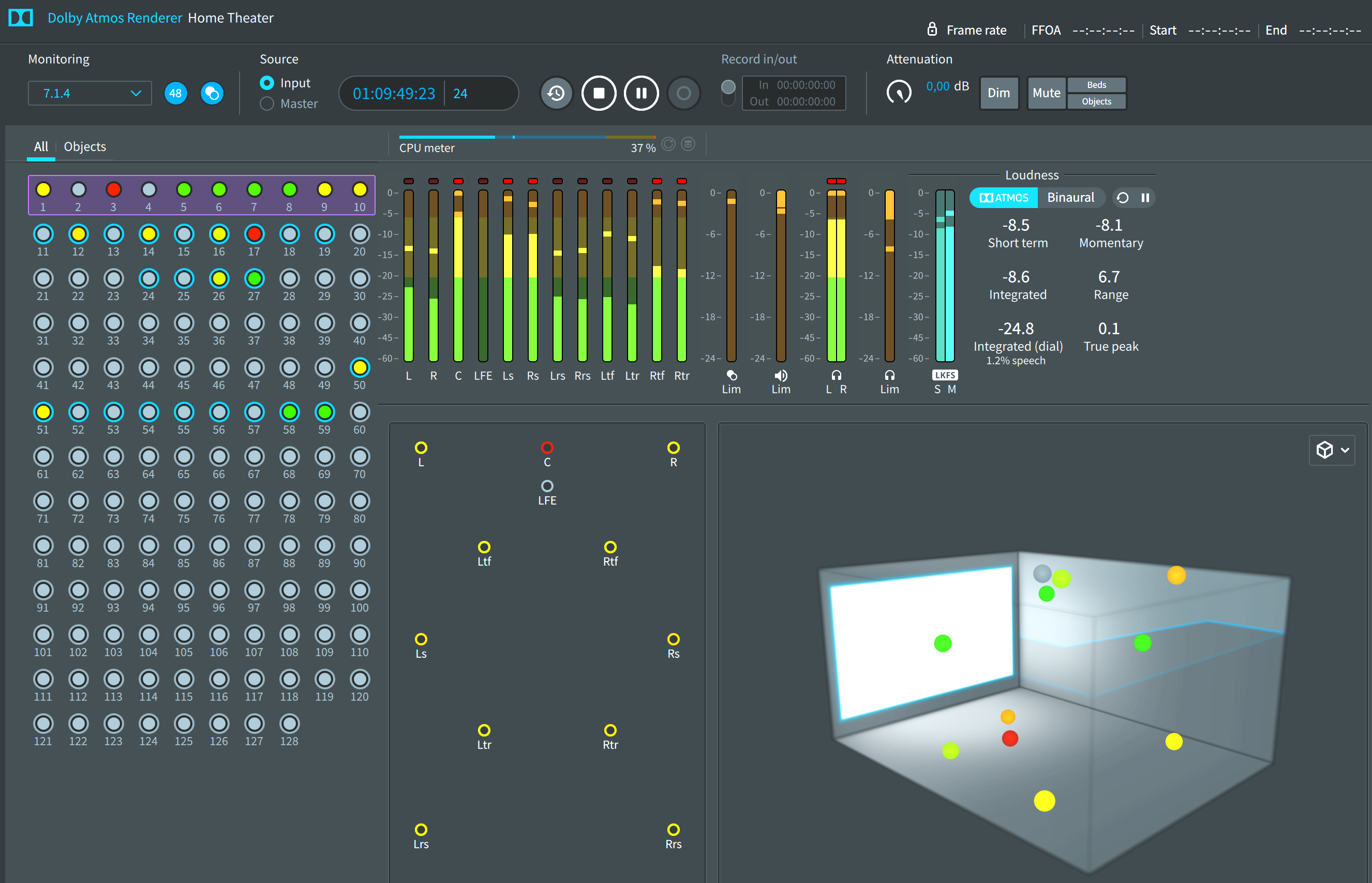 A Dolby Atmos renderer is part of the Dolby Atmos Production/Mastering Suite. It is software that is necessary for rendering audio and Dolby Atmos metadata from a DAW and allows you to listen to a Dolby Atmos mix. The Dolby Atmos Renderer supports binaural rendering, which is designed to be used to encode content as Dolby AC-4 Immersive Stereo (AC-4 IMS).

These different settings are used to apply different types and degrees of spatiality to the corresponding objects or bed channels. Near, Mid, Far describes the distance between the sound source and the listener’s head position, which is stored using metadata. The binaural mode settings are applied to the headphone signal during the mix when listening, recording or playing back; they play no role in speaker playback.

Dolby Atmos content consists of bed and objects, as well as associated metadata. A bed is a channel-based premix or stems with multi-channel panning already included. The bed does not require dedicated panning via Dolby Atmos metadata – you can think of a bed as a traditional channel-based configuration (such as 2.0, 5.1 and 7.1). These are fixed positions in the room used for traditional speaker layouts (including speaker arrays).

An object is a mono or stereo audio content that has dedicated Dolby Atmos panning and can be placed anywhere in the three-dimensional sound field. An audio object can use a different number of speakers for playback, depending on how it is defined by position and size metadata. Objects can be static or dynamic (moving). 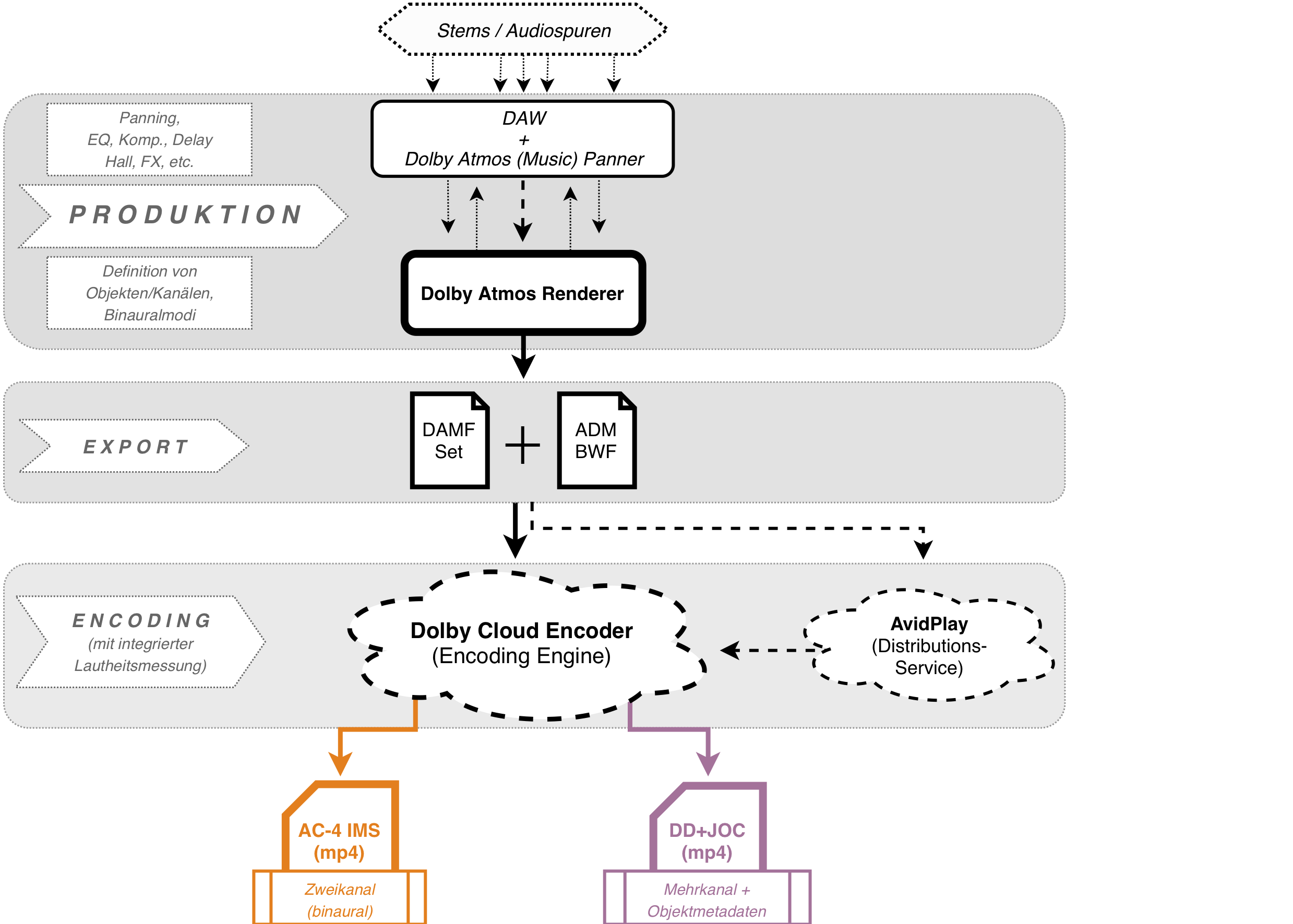 According to Dolby, AC-4 IMS was specifically optimized for the distribution of Dolby Atmos Music for mobile devices. The AC-4 IMS encoded file is (at least according to information in May 2021) a two-channel file, whereby the binauralisation already takes place during the encoding process. In the following distribution process, two files are ultimately transmitted: AC-4 IMS (binaural with two channels) and DD+JOC (multichannel with object metadata).

Dolby Atmos Music is the latest addition to the "Dolby Atmos" cosmos. Strictly speaking, it is a mixture of channel-based and object-based production methods to produce immersive music content for headphones and speakers. The playback options are wide-ranging, from Tidal to Amazon Music HD* and Apple Music, and include a wide variety of streaming providers.

There could be room for improvement in the encoding – currently, two different files are used: AC4-IMS for headphone playback and DD+ JOC for speaker playback.

Switching to one codec for all formats – as is currently the case with the object-based MPEG-H audio codec, for example – would simplify the process and make it more transparent. Nevertheless, Dolby Atmos Music is an interesting technology that – together with Sony’s simultaneously released 360 Reality Audio – has opened up the music market in the direction of 3D audio.