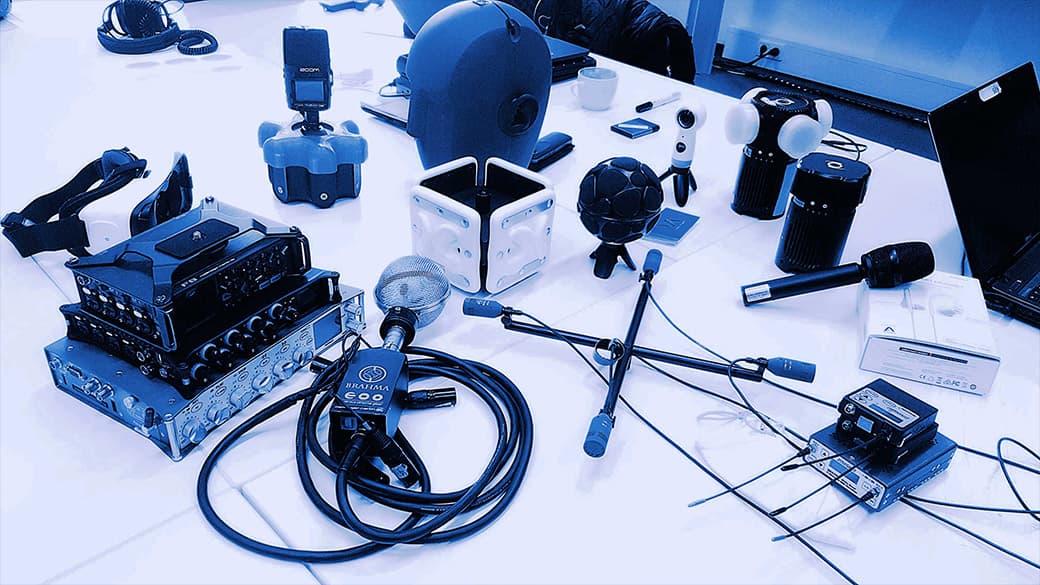 When somebody mentions 360 microphones, most people think of Ambisonics. I must confess, I don’t think that’s too bad actually. This format is quite practical under realistic recording conditions, such as when shooting VR videos with a 360° camera.
That’s why I’d rather call them a 360 microphone in connection with virtual reality and 360 videos, even if 3D microphones would be more appropriate. Historically, 360 audio rather describes surround sound, i.e. no sound from above or below, so only planar.
As a logical consequence, there is also a whole range of recording techniques. To keep the overview, I would like to try to categorize them, as I did with my article Virtual Reality Audio Formats.

First of all, I would like to point out that this overview is not to be understood in a judgmental way since most discussions on 360 microphones and sound recordings tend to forget: Every setup has advantages and disadvantages and these depend less on the microphone, but more on the circumstances under which the recording happens. Furthermore, I was not sponsored by any of the manufacturers and will try to be as objective as possible.

Be informed about new 360 microphones

These microphones, or microphone arrays, were usually thought of for later playback on loudspeakers, which is only relevant for VR Audio in special cases. Nevertheless, it is worth knowing the approaches in the following.

For this purpose, any microphone can be used, preferably one with an omnidirectional pattern, which records the sound from all directions. As a result, only one channel will be used and the later playback with dynamic head-tracking will not work. At least better than the most sound from 360 cameras and therefore mentioned for the sake of completeness.

Here, too, the application for VR does not appear to be entirely clear at first glance. In this respect, the most important representatives, XY, AB, ORTF and Blumlein are mentioned only briefly. However, I would like to refer to a presentation by Schoeps on the topic Microphone technology for VR. As a result, I also like to use stereo recordings for 360 videos, even if they don’t "fill the whole sphere with sound".

There are also some interesting applications of surround, which in the classical sense, is also called 360 sound. Hence, no sound can be reproduced above and below the listener, but still may be useful for certain 360 recordings.

Is probably one of the most famous representatives among the 360 microphones mentioned here and still has its right to exist. Thanks to a firmware update, it can record in spatial audio mode directly in Ambisonic B-format, only without height information, leaving the third of four tracks in Ambix format empty.

This four-channeled by IRT (Institut for Broadcast Technology) shows an alternative to Ambisonics (more on this later). Due to the additional time that sounds needs to travel between the microphone capsules and focus on one plane, the localization can be more accurate than in the case of the Ambisonic A-format microphones. Consequently, it takes up more space and may be crucial to hide on a tripod under a 360-camera.

Even though I am often asked about Dolby Surround 5.1, 7.1 or similar, these formats are not very relevant. Due to the speaker in the middle, called the center, which is supposed to play mainly speech becomes superfluous. However, in special cases, it may be advisable to amplify more microphones in one direction. Similar approaches, yet more flexible is Schoeps Double MS, Nevaton BPT, Josephson c700s or Antelope Audio edge quadro. With dedicated dencoders, they can be transformed into complex microphone patterns such as M/S, X/Y, Blumlein and combined with each other.

Finally, we get to the really exciting representatives of 360 microphones, which, in contrast to Ambisonic, usually achieve their sound characteristics through differences in running time, as already mentioned with IRT-Cross.

Basically, this 360 microphone array is a cuboid with eight microphones pointing into each of the corners. This is available in different versions, for example with super cardioids instead of cardioids for the vertical axis, or additional space for the height layer. Comparable is the ESMA-3D (Equal Segment Microphone Array), which is also interesting for the SPS Mach1 format, even if the conversion is a bit more complex.

As you can guess, there are microphones in the most different arrangements, which is why the following should be briefly mentioned here, but are by no means all:

Binaural describes a playback method that is only suitable for headphones. As a result, it is useless for loudspeakers, but in contrast, it allows a three-dimensional reproduction of sound with only two channels.

The most famous representative is probably the Neumann KU100, which is still used as a reference in times of 360 microphones.

If you’re not a fan of in-ear headphones, these microphones might make you enthusiastic about them again. Because these hybrid earphones can record and reproduce sound at the same time. This creates a very personal sound image, which is easy to handle, as the in-ears only have to be plugged into the ears.

Probably the most bizarre-looking 360 microphone comes from 3Dio and was often used around 360° videos at the beginning of the VR hype before it was replaced by Ambisonic microphones in the medium term. Even so, it retains its raison d’être.

Very similar in principle to the ears above, but has a sophisticated system, which makes it very easy to attach to the tripod under the VR camera. In addition, the missing ear cups filter the sound less compared to an HRTF (head-related transfer function) and is, therefore, more useful for loudspeaker applications.

Let us now come to the most famous representative: Ambisonics. This sound field technology is ideal for recording and reproducing spherical sound recordings. For more information just click here.

For this type of recording, a tetrahedral arrangement of the cardioid microphone capsules has established itself, which ideally sit as close together as possible. But there are also other possibilities, like a Trippel-MS setup, or the idea of skipping the A-format and record natively into the B-format with one sphere and three-figure of eights.

Because there are now a number of audio manufacturers who have brought a very similar 360 microphone, sometimes referred to as VR Mic or 3D Microphone, to the market for VR Sound, these are only listed in keywords, in chronological order.

It should be mentioned, however, that they are all four-channel, and are mostly used in combination with an external recording device. So the Zoom F8, Zoom F4, Sounddevices MixPre-6 and MixPre-10t, as well as the Tascam DR-701D have their own firmware updates, which allow an easy recording and live preview for headphones.

Some of the 360 microphones mentioned have their own plug-ins, such as the AMBEO A-B converter plugin or DearVR Micro, as well as the SoundField by RØDE plugin. These can convert the Ambisonic A format recording to a first-order B format in Ambix or Fuma. In addition, it is possible to listen to the sound directly via various binaural decoders or even loudspeaker arrangements.

Mobile recording devices that have an Ambisonic arrangement integrated are the following:

For more information on VR cameras suitable (or not) for spatial audio, such as the Sonicam, Nokia Ozo, Kandao Obsidian, GoPro Fusion or Vuze Camera, please click here.

The next generation of VR microphones is already on the way, using eight or more instead of four microphone capsules. Advantages include higher localization and better sound field reproduction via loudspeakers. Even though B-Format would require 9 channels, second-order A-format microphones usually use eight to twelve capsules.

With both 360 microphone versions it is possible to record in the so-called SPS-8 format, but strictly speaking, they are not Mach1 format. One needs an intermediate step to convert the A-format into a P-format, which is possible with a filter matrix of the manufacturer.

As a rule of thumb, if a microphone array contains about 20 microphones, depending on the manufacturer, this is referred to as Higher Order Ambisonic. Even if it still sounds like an incredible number of microphones, the actual number of products is manageable as 360 microphones.

Even if I don’t really want to start a whole new topic and talk about audio objects like MPEG-H 3D Audio or Dolby Atmos VR, you shouldn’t forget the most important thing:
No matter how good the choice of the 360 microphone is, whether Ambisonic or not, in most cases, it is more important to concentrate on mono microphones. Be it classic supports for 3D orchestral recordings or clip-on microphones for protagonists, mono microphones usually remain the thing at VR recordings, to which I pay the greatest attention. Of course, this also depends on the case and the truth lies somewhere in between, but I find it incredibly helpful if you already think about the immersive audio mix during the 3D sound recording.

So there is a huge and growing selection of 360 microphones that you can use for VR recording or 3D audio. But don’t forget that there is never the perfect microphone for every situation, just one or more best microphones for the situation. I’m happy to help you find the right choice.