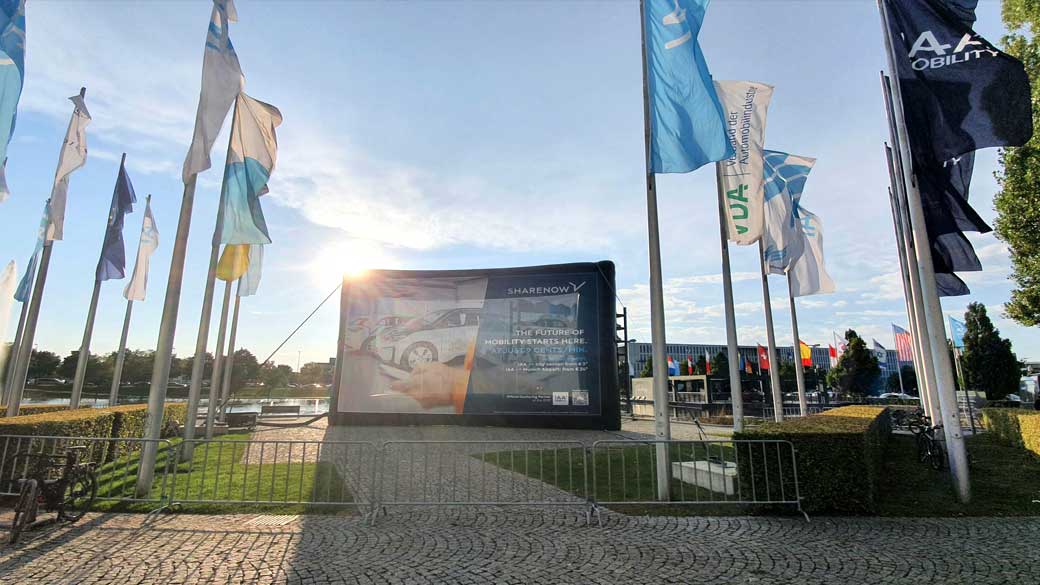 Messe München
To the Event

Mobility is in a state of upheaval: new mobility carriers, technologies, and players are appearing on the scene. As are new forms of media consumption in the automobile. Findability, usability, and formats tailored to the usage situation in the car are topics that both media professionals and car manufacturers are dealing with. For the first time, the MedienNetzwerk Bayern will therefore be represented with a stand at the IAA Mobility.

In our VR media demonstrator we will present the interactive radio play puzzle Drive Crime, which was developed especially for the use case in the car. Drive Crime illustrates how technical developments enable new innovations in the audio sector for the automobile. The media demonstrator is a virtual reality application that leads to a realistic experience of testing content and helps media professionals to develop a better understanding of future media use in the car.

Together with XPLR: MEDIA in Bavaria, we will show at our stand how diverse the audio industry is in the media location of Bavaria and which innovative projects are currently being developed. We also have voice specialists and radio producers with us to promote the exchange between the media industry and the automotive industry and to initiate new cooperation. Here are 5 innovative use cases in the car with colleagues. 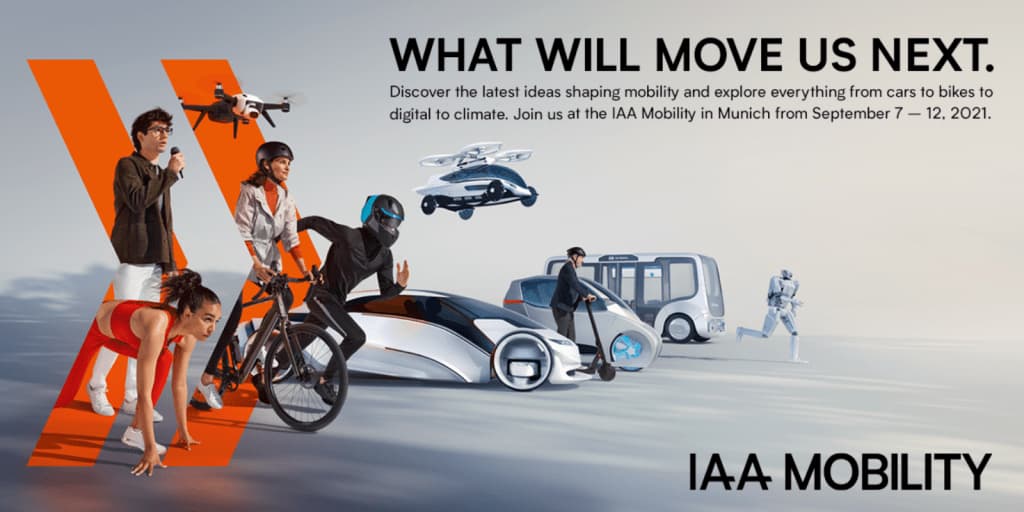 After a long and exhausting day at the fair (after a break of almost two years, one is simply no longer used to the 20,000 steps), I was able to draw a small conclusion: Audio is definitely a topic and almost everyone has 3D sound on their radar. Immersion is becoming more and more important with autonomous driving in order to be able to offer drivers the best possible experience. So let’s take a look at what we heard:

Admittedly, I have been somewhat critical of Apple Music lately. Mainly because it doesn’t work so well for me over headphones yet, among many other reasons.

Nevertheless, I find the car an exciting use case and find it quite positive that Dolby Atmos is used here. That’s why I was happy to be able to listen to the audio experience in the "immersive lab".

For your information: The Volvo, as seen here, is not yet available with Dolby Atmos as standard. The audio engineers have installed additional speakers and adapted them to the car. But in the future, something like this could roll off the production line. 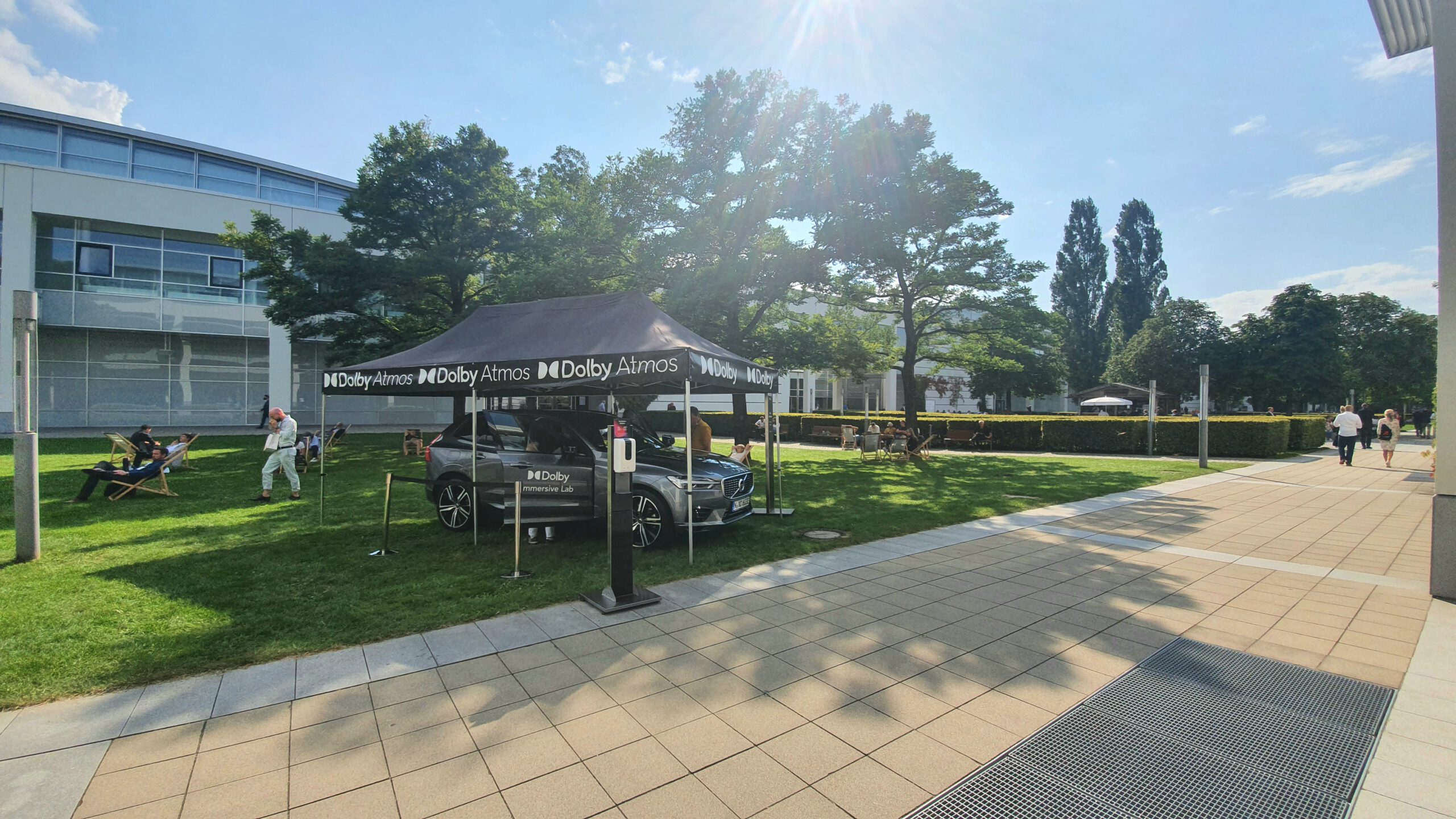 My colleagues from IAL have shown how the acoustic interior of an electric car can be brought to life. Since the engine sound is missing in comparison to the combustion engine, one can make a virtue out of necessity. Even though it is only legally prescribed to sound the exterior of a car up to about 50km/h, there are no limits to the interior.

Here, there are several approaches in one. On the one hand, a sound engine was built here that sounds very futuristic on the one hand, but on the other hand also sounds like a powerful engine noise, as one is used to. This is especially fun when driving dynamically. In contrast, there is a soundscape that develops – depending on how the accelerator pedal is pressed. This creates an immersive soundscape that is in no way comparable to classic entertainment media such as radio, music, etc.

The clue of the demo: An AI determines the driving style of the user and automatically switches to the appropriate sound. This depends on how dynamic or relaxed the driver is. The video explains the potential once again – excellently implemented. Aesthetic and functional at the same time. Click here for the video. 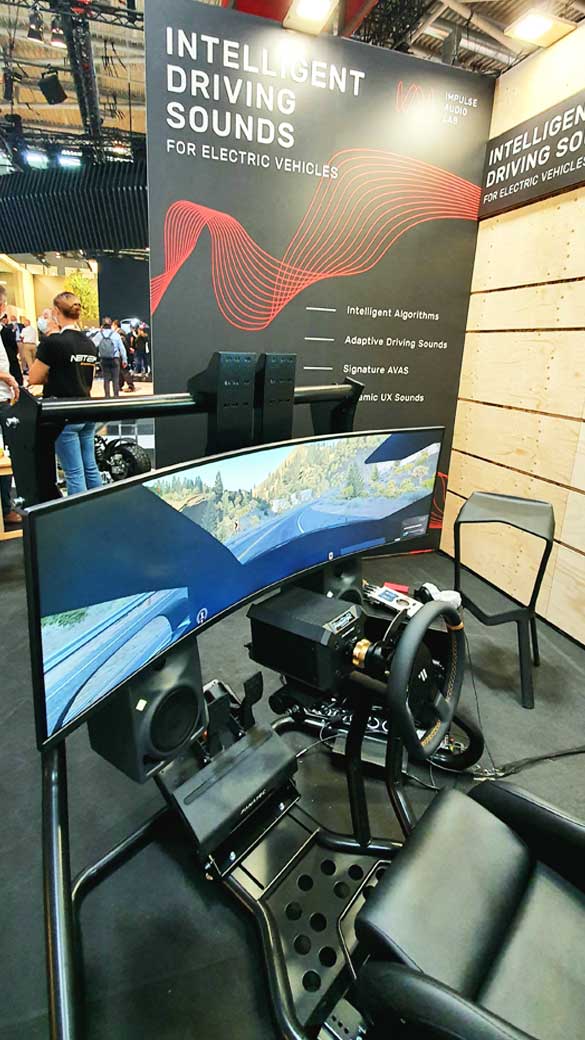 And last but not least, the demo seat from Flexound. They work with vibrations to augment the sound experience. To do this, they have built drivers with speakers into a seat and it has something of a pleasant massage. Now that car seats are already full of high tech, this is certainly a nice addition to the entertainment sector. They advertise relaxation on the one hand and improved perception of music and speech on the other. In any case, a fun affair, as the picture shows. 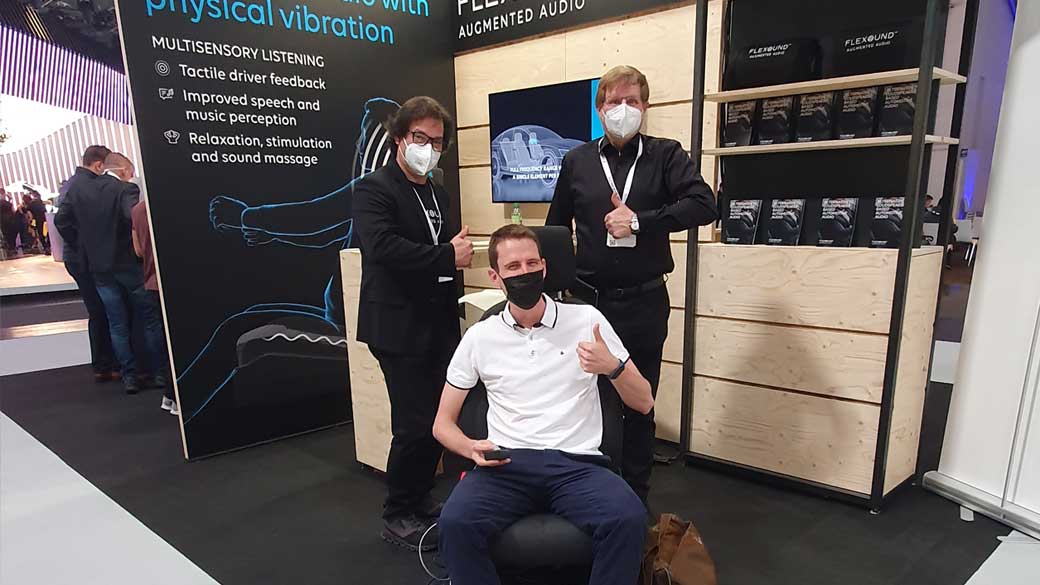 This French company wants to shape the future of automotive audio. They only offer software solutions. Of course, I was particularly interested in the 3D audio functionality of their soundstage. They advertise alarm sounds, for example, which are supposed to inform the driver about possible dangers via the spatial sound. A nice example of how 3D sound can be used not only to entertain, but also to provide added value. 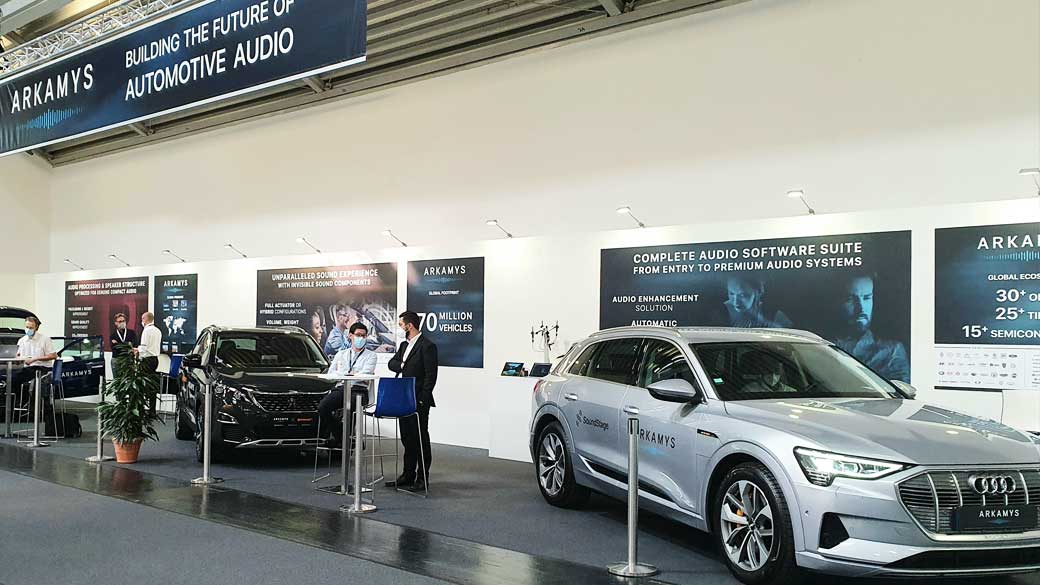 Thanks to the aforementioned media network, I get to be there too. While we have long been able to see films in 3D to experience them more immersively, we still only listen to radio, music and other audio formats in two dimensions. Martin Rieger from Munich wants to change that with his company VRTonung: He wants to use the car as a high-tech infrastructure and make 3D listening in vehicles possible via smartphones and smart speakers.

Recordings produced with 3D technology can thus transport car drivers in their minds to their favorite radio play or to an excursion on Lake Chiemsee. "In the car, much more than just voice is possible. Use cases are emerging in 3D audio that we don’t even know about yet, but which will soon become an integral part of our lives. After all, we are used to hearing in three dimensions – now also in the car," explains Martin Rieger.

Here are a few impressions from the trade fair stand: 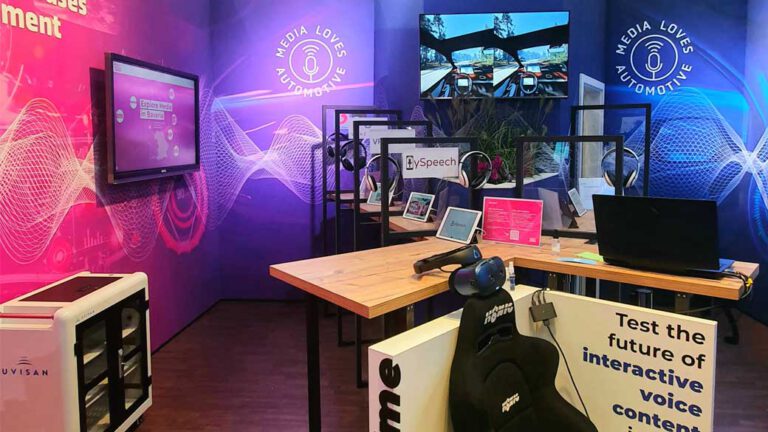 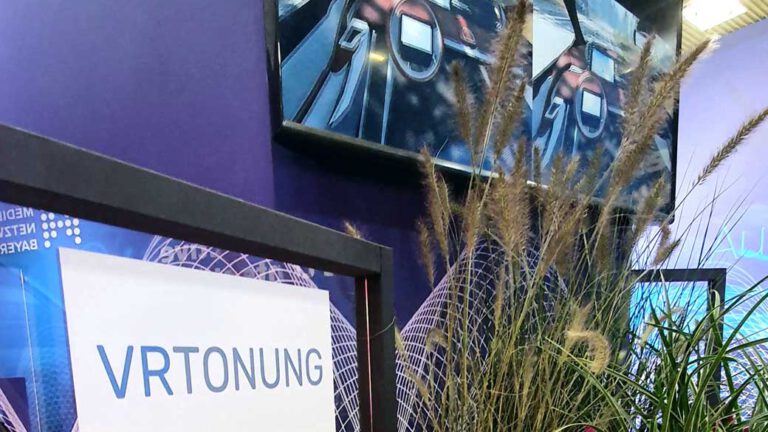 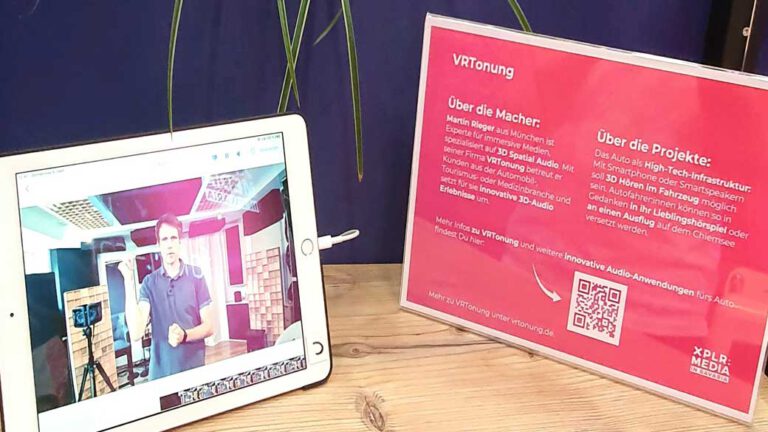 Here are a few more impressions of the fair and the VR experience that I’ll leave to their own devices. I hope I was able to give all those who were not able to be there a small insight into the world of automotive audio at the IAA Mobility. Thanks again to Mediennetzwerk Bayern for letting me be there. 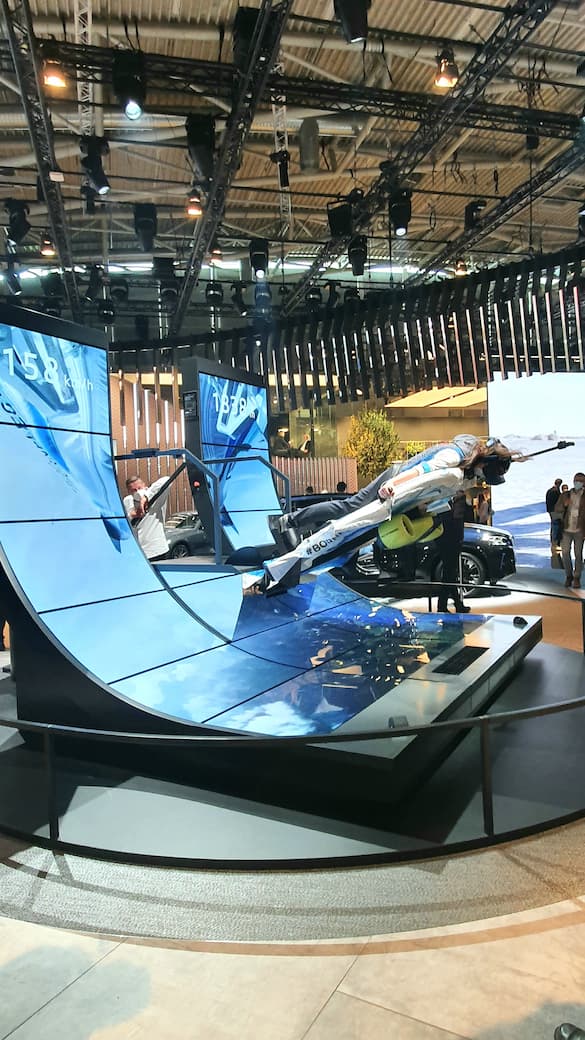 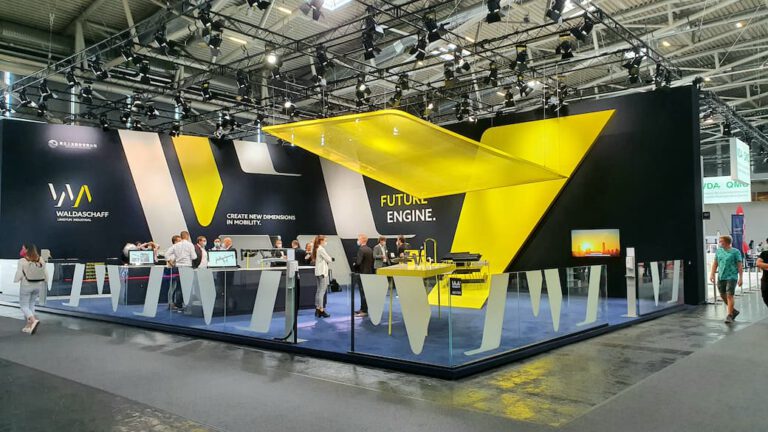 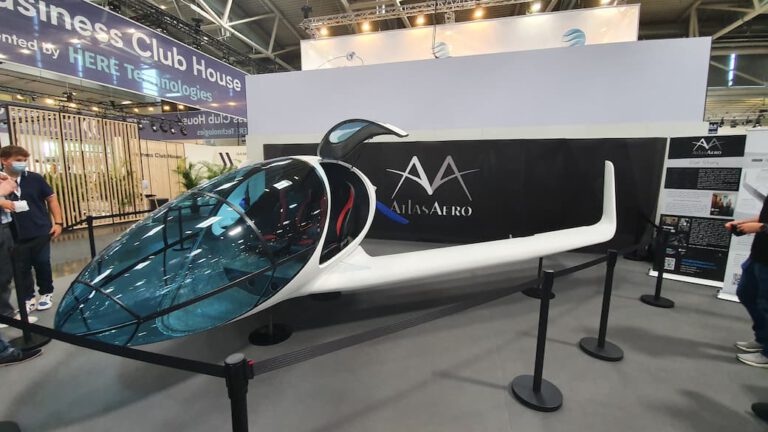 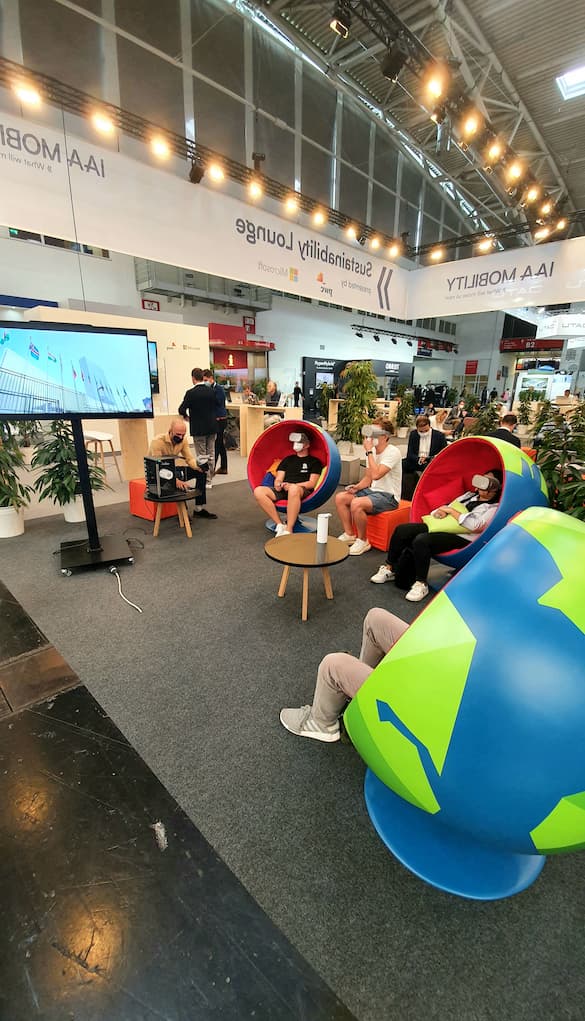 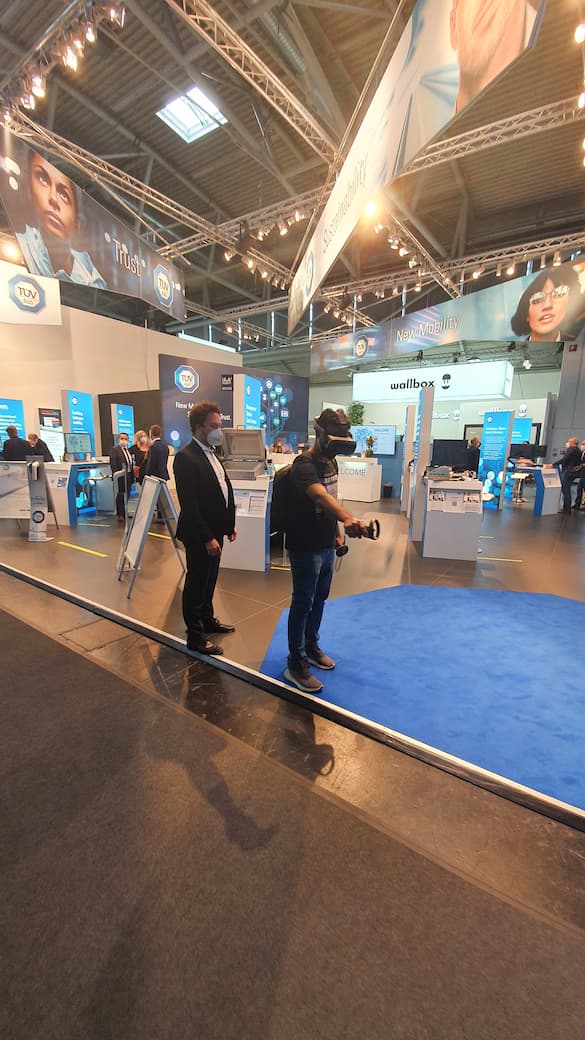 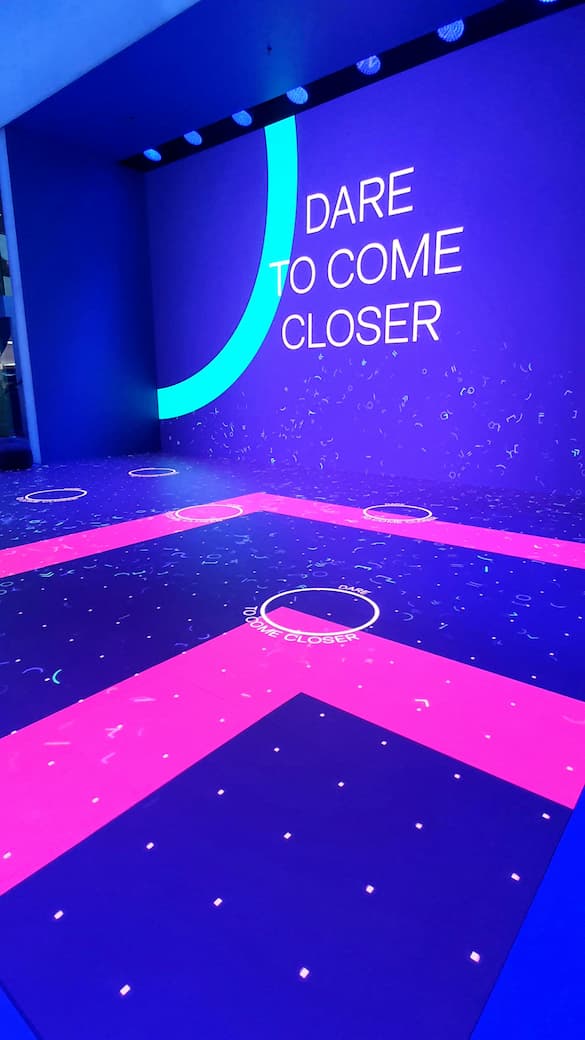