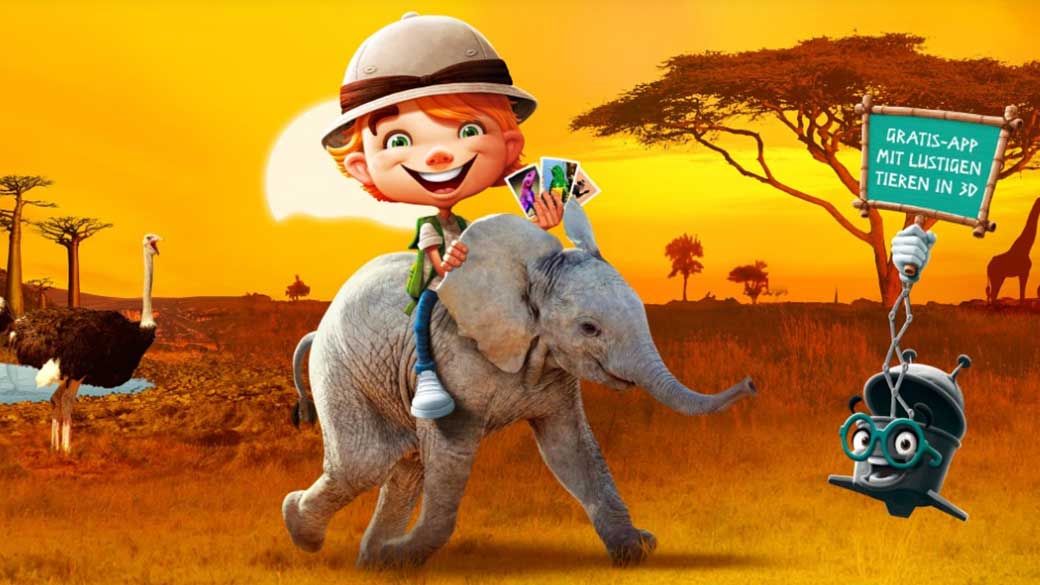 Stickermania? You never heard of it? All right, in Germany, we know it more as Panini collectors’ pictures. The principle is simple. You buy the scrapbook and collect the stickers. But the exciting question: What has Augmented Reality got to do with the supermarket chain Spar.at?

It’s very simple. In addition to the book, an app is available for free in the Google Play Store and Apple App Store. By the way, it has already been downloaded over 50.000+. With it, you can scan the stickers digitally. This is where the fun really starts. Because real animals were transformed into 3D models in order to create funny animations. The whole thing happens for example in the living room at home via AR. With the augmented reality application, the animals can then be placed in any environment. Visible, through the camera of the smartphone and enhanced via the Google ARCore.

That alone looks funny, but of course, it also needs the right sound. This is where I came into play by adding sparkling sound effects and music in a child-friendly way. Besides the title music, which can be heard in the video above, I also designed loopable mini-titles for the 16 augmented animals in an African style. For example:

The mini-game is also lovingly designed in the form of a labyrinth, which can be accessed via the augmented reality function and 6 DoF (degrees of freedom). Also here, a creepy, funny surprise lurk, like a mummy. If this is defeated, the triumphal score sound can be heard, based on the title music. Thus the AR sound is completely cast from one piece.

In total, three soundtracks for the menu, the explanation video, and the labyrinth where composed. Then five jingles, depending on whether the sticker was scanned successfully or you ran into a trap in the labyrinth for example. And the heart of the game, the 16 animations of the 3D animals, each with its own specially composed music. As well as matching sound effects with a certain amount of humor.

The great thing about it is that by simply collecting the pictures, the children are offered an added value that is not only entertaining. Gamification is a playful way of practicing the use of new technologies. Like here smartphones and augmented reality.
The challenge for AR Audioproduktion was on the one hand to create sounds that are catchy and child-friendly, but on the other hand not tiring. Especially the title music is played again and again in the menu, but even after the hundredth time, one is not inclined to throw the phone away. I should know, after hearing the audio objects at least as often.